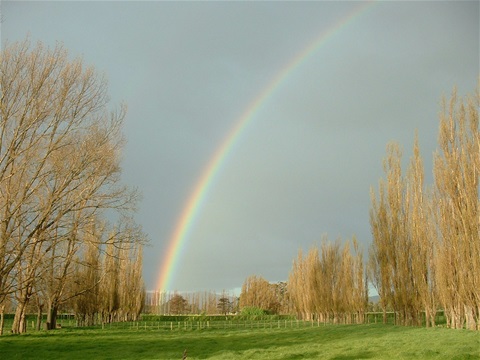 The Rainbow of Hope - Melissa's story

Melissa Helen , the fifth child was born and welcomed into our family with love on 28 April 1988.  Our joy quickly turned to disbelief within an hour of the caesarian birth when we were told she had a condition incompatible with life - known as Trisomy 18 or Edwards Syndrome.  We found ourselves in a totally unprepared role which had devastating consequences.  We soon realised there would be little medical intervention for her - we - by instinct became the medical team with a marked difference.  We had no equipment - only love, a great love and hope.

We took her home aged 14 days - we needed her home, surrounded by love - we were fully aware it was against all odds and our time together would be short.  We took turns sitting and holding her, cuddling, loving her and praying to manage to feed her.  Her mouth was so small, the teats too big and she was too weak to suck so we used a dropper and a teaspoon and were thrilled when a sip went down.  It was not easy , but with a unexplained strength our family cared for this baby realising every day may well be the last though determined to give this infant the chance the doctors had virtually ruled out.

Each time we laid her down to sleep she would change to a grey colour and it seemed like she was slipping away so we decided as time was short we best take turns and hold her in an upright position which kept her more comfortable and her breathing less strained.  Our team of 2 increased to 3 with the support of a wonderful neighbour to help us with our life saving task.  Amazingly this wee soul survived with the minimum of fluid intake and catnaps, no real sleep.

At 4 months old she developed a pneumonia like illness which had her hospialised and on oxygen and in a poorly state.  To the family we saw the hospital staff were expecting the worst. However with constant touching and love after a week of incredible strength shown by this wee baby there was a change of medication in a desperate one off chance at life and that longed for miracle happened.  As a mum so emotional by the constant caring for our child - I turned to the window to hide my tears of relief and thanks - to be greeted by the wonderful sight of a perfect rainbow.  Again that hope was there, that chance of life again renewed but a difficult journey by no means over.

We took each day at a time but again and again during those first precious years of Melissa's life the rainbow shone and generated massive energy to a family desperate in need.  The prescribed antibiotics achieved wonders and actually cleared up all the fluid in her lungs to the amazement of her Paediatrician and it was as if she had been given a second chance at life or as her caregivers we had been rewarded for our determination.  We still struggled with feeding and sleeping but still had the belief as time was to be short we could do what was necessary to maintain this 24 hour vigil.  There were several frights along the way with her grey floppy periods where our only hope was movement and prayer.  Feeding was a perpetual nightmare where all intake ws recorded by drops, but with a miracle we did overcome those dark months and towards her second birthday we realised we had experienced much and learnt even more about our daughter's condition. - incompatible with life wording needs to be changed!

Some of the things we learnt were that her body coped better with isomil - a soy based baby formula, this and many conclusions we came to by trial and error.  Facts like her body was unable to cope with the outside moving air, or wind.  Melissa was photosensitive and could not manage sunlight or being in a sunlit room.  Her body temperature was erratic and she could tolerate foods with orange colouring. i.e. orange juice or carrots.  Pears were the only fruit she could manage.

We were confined to living with her in a dimly lit room, curtains keeping out the sun, windows and doors closed from the outside air.  When any of the above were not adhered to, we were faced with the horror of her rapid deterioration and her having difficulty to breathe and the all too real fact of losing her.  As her being was so fragile we had to go to enormous lengths to protect her from colds and flu and this with a family of 5 children in itself was a daunting task.  It was very real though, as when we did slip up we then had massive problems feeding her and were quickly faced with the reality of losing Melissa.  As time went by and with the sight of many rainbows in our dark times we gained a small team of caring people who also had a belief and a hope for our precious wee girl.  People who were happy to spend time with her and stimulate her, encourage play, have fun and laughs and who recognised that even though she was unable to walk and talk she was able to give so much of herself.

Melissa learnt to communicate in her own way and those who loved her and connected with her enabled  her to grow.  With our help she was able to do so much, go swimming in an indoor pool, horse riding in an indoor arena, learning to walk, use a standing frame to play ball, use a slide, using a switch adapted computer and sharing with us precious smiles of happiness.  She was determined to live each day to its fullest and loved it when caregivers assisted her to ride her specially adapted bicycle through the house giving her the freedom she desperately yearned for.

The high cost of this twenty four hour care was devastating on our lives and our family fell apart due to the immense stress caused by her care but Melissa gave us all as individuals so much.  She had become a blosoming young lady, so mischievious and loving to those who spent time with her.

During the winter months I took up quilting as a hobby, something I could do from home and really enjoyed.  This led on to wanting to make a small quilt for Melissa to use when in her wheelchair.  Melissa's sister had seen some material with Noah's ark and the rainbow on it and suggested we use that and for the backing we found some material that had written on it "Please send me a rainbow quick" with a rainbow design.  We were both so happy we had found such appropriate material.  I was eager to get it all together so I could start the hand quilting.  The 1st Saturday in November we decided to baste it together and scarcely had we achieved that when Melissa took a real bad turn and we rushed her to hospital where her life was saved again, miraculously.  The remainder of the month was spent mainly in hospital and whilst at her bedside I worked away on her quilt, desperately wanting to finish it.  I finished her quilt on 30 November - thrilled Melissa now had a quilt of her own.

Unexpectedly  two days later on the 2nd December 1997 Melissa lost her battle for life aged nine years and seven months.  As we took her home from the hospital  wrapped in her new quilt I again realised how another thread had been woven into her life with the rainbow.

At her church service we celebrated her life and gave thanks for the time we had shared together and all that we had learnt.  Then we gathered at the children's cemetary on a dull cloudy morning with a bunch of rainbow coloured balloons.

After the commital prayer her brother shared for the last time the special prayer I had prayed each evening - Into God's hands - As he was saying the prayer he was bathed in a shaft of sunlight which warmed him and caused him to look skywards to be greeted by a circle rainbow. So unusual - that rainbow was there for us all to witness as a true testimony of how special our wee girl had been and how she had returned safely home having completed her journey of life.  As a last gesture the rainbow balloons were released and all watched as they took the same path towards the gap in the clouds through which we had earlier witnessed the rainbow.

We were blessed to have shared in a life so special.

I was looking at your website and noticed it appears the word "cemetary" is spelled wrong. I had similar problems on my site until someone mentioned it to me and I also now use software from SpellPer

My name is John Garcia, a Senior Book Publicist from Pro Creation Press.

We would like to invite you and your book to the upcoming Los Angeles Times Festival of Books.